GOD HAS A DREAM 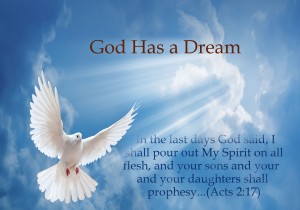 Last Sunday I shared the numerous prophecies God has destined for Maine and New England released by well-known prophets over the past few years. The Lord is determined to let His people know there is coming a visitation of His glory with a fresh baptism of the Spirit. Fresh fire is coming to the Lord’s house.

Maine will be used to facilitate the gift of others that will attract a harvest, raise up shepherds and restore Churches. Maine is called to be the main gate that will impact New England. Maine’s state motto is “Dirigo, which in Latin means, “I lead.”

I took a survey and asked everyone present, “How many of you have the desire for prophetic training?” In response every hand shot up! Throughout the Nation, people are expressing an insatiable desire to draw closer to the Lord and live life from the place of His heart – to be part of a move of God. To live the supernatural life the way Christian life is meant to be. Rejecting religion and men’s traditions that are not of the Lord, they shall have their desire – the joy of His fellowship.

One thing is obvious – the hunger of God’s people far outweighs the current ministry of most leadership. The heartbeat of God’s people throbs with the desire to receive prophetic training. God has placed this very hunger in their heart. Why? To compel them to receive the training and spiritual growth needed to host and carry forward a greater measure of the light of His glory.

The next move of God will keep moving until the knowledge of the glory of the Lord covers the earth as the waters covers the sea (Habakkuk 2:14). Soon a baptism of fire will anoint God’s people with fresh oil (Psalms 92:10). It is clear that the mandate of Church leadership is to perfect the saints and to equip them for the work of ministry (Eph. 4:11). Now is the time to equip and train the people for ministry. A major harvest will soon be upon us.

The Return of God’s Glory – There is an unprecedented move of God coming and it has already begun. The late prophet Bob Jones prophesied that starting March of 2017, the glory of God that departed 40 years ago would once again return to the Church. Although the Church has been blessed with anointed ministers with an occasional visitation of His presence, what is coming will pale in comparison. Bob also said,

” The church is about to catch fire. The glory of the Lord is going to fill the house in such an extraordinary way that it’s going to be contagious. People everywhere will come to feel the presence and power of the baptism of fire.”

With every move of God, there is an accompanying increase of prophecy visions and dream. As a wise Father, God’s is preparing His people to host the light of His glory with wisdom and integrity. For this reason, Schools of prophetic training are being established to equip and empower God’s people for prophetic ministry, as well as to equip prophetic trainers to train. Our ministry is but one of them.

God Has a Dream – More than 2,800 years ago, God inspired Joel to express His dream, stating that in the last days, “ I will pour out My Spirit upon all people, and they shall prophesy. ” We are in those times where the Spirit of the Lord will be poured out upon “All People” with supernatural signs that will make even the most unbelieving atheist tremble with wonder.

We are now witnessing an increase of His glory but in increments. We are also witnessing prophetic grace upon an ever-increasing number of God’s sons and daughters. As previously mentioned, their passion is to be equipped in their prophetic gifts and to be part of a life giving prophetic community.

I believe the Spirit of the Lord will be released in waves. Each wave will increase in intensity and power until the full tide of His Spirit reaches the high water mark. His people will then become the outpouring to release rivers of living water that impacts cities, communities and even Nations with the Kingdom of heaven.

God is restoring the authority of the Church and the Word is going to carry the weight of His authority. The theme in this season is “Cultivating a Prophetic Edge” with the exhortation to “Prophesy again.”

Prophetic Fire – Prophetic fire is coming that will not only consume all the wood, hay and stubble but bring resurrection life where there is death, light where there is darkness and order where there is chaos. His Words are Spirit and they are life (John 6:63). Prophecy has the power to bring healing, restoration, and redemption. His Word breaks the chain of bondage from bloodlines and awakens hearts by the power of His love. His Word brings reconciliation; ministers the truth that makes men free, shakes years of despair and can heal the soul and reform society.

In preparation – In preparation for a fresh baptism of fire, Churches are responding to the call to provide prophetic training that will enable God’s people to operate at a higher level of the WORD with Kingdom authority in power and demonstration of the Spirit.

Now is the time to prepare. The Lord will only trust His authority to those that have His heart that minister with His love. A people that are not consumed with their own authority, titles, or position, or that seek to enlarge the size of their congregation, but will lay down their lives for God’s people to expand His Kingdom

God has a dream. His passion is to Father you into the fullness of His glory. And from the place of His presence reveal the fragrance of the knowledge of Him in every place (2 Cor. 2:14).

Our desire is to respond to God’s dream. We have the heart and the ordained mission to equip and train others in the prophetic as well as other spiritual gifts for the work of ministry. Perhaps you too have heard the call?

In His heart with love – Roy