The Power of Prophetic Unity 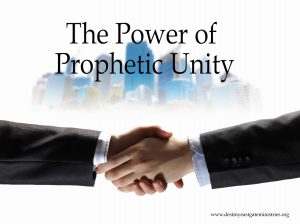 In the story of King Joash (2 Kings 13:15-19.), by Elisha’s request, the King got his bow. Together, Elisha and Joash shot an arrow out the east window. It was this prophetic act of shooting the “Arrow of deliverance” “as one” that the angels of heaven engaged with the armies of Israel to smite the Syrians in battle.

The atomic power released by this prophetic act occurred when the Prophet Elisha put his hands upon the hands of King Joash. TOGETHER, they shot the arrow out the window towards the east that resulted in Israel’s deliverance.

When the hands of the prophetic people and those in authority join hands, the power of unity will cause “arrows of deliverance” to take place. The result will launch a dynamic move of the Spirit throughout the region.

As a recent example, Bob Condon who pastors Gateway Christian Center in Cotuit Massachusetts asked me to conduct the School of Watchmen / Seer at his Church. Ministering under Church authority, we saw God move on behalf of His people. When Eastgate Ministries and Pastor Bob joined hands, our unity (joining gifts and mantles) multiplied spiritual authority and the Lord was magnified. During Sunday’s service, we witnessed the abiding dew of heaven that rested upon the people.

The Power of Unity

King David knew the prophetic power of unity. Psalms 133:1-3 tells us when the brethren dwell together in unity; the anointing oil is released upon the head. It then flows down to bless the body of Christ. This opens the gateway for the dew heaven to fall upon the people ”For there the Lord commanded the blessing, even life forevermore.”

Unity brings a four-fold blessing – a fresh anointing, (Ps. 92:10) the dew of heaven (His presence) and the commanded blessings (favor) of the Lord AND the more abundant life – His life, now and forever more. We are about to witness that which we have never seen before – a unified people where Christ is revealed “on earth as in heaven” as Lord of Lords and King of Kings.

Likewise, the inverse is true. When those called to prophetic ministry and those with governmental authority are divided, the result is division, discord, and strife. This opens the door for “Confusion and every evil work” (James 3:13-18).

God’s heart is to repair the breach that exists between pastoral leadership and those called to prophetic ministry. There are too many wounded on both sides of the fence that grieves the heart of God. This will now change.

I have seen too many examples of people pursuing gifts for power and influence. The prophetic gifts are to first display love, acceptance, mercy, compassion and the nature of God. Instead, all too often people misuse the prophetic gifts as a means of finding their identity through performance. And all to often, people seek to fulfill their identity through their ministry. There is an identity crisis in the Church.

Simply because one is called to the prophetic ministry, doesn’t mean they are given governmental authority. Gifts are given, but trust is earned. Positions of authority with responsibility are not granted by the measure of one’s gift, but by one’s character, such as the trait of humility and a teachable spirit with a heart to serve. Carrying a rejected heart, many often end up with a disdain for true authority. Frustrated, many will leave a Church prematurely just to become isolated. They may be in ministry but fall short of their full potential and ordained destiny. King David noted,

Those that are planted in the House of the Lord shall flourish in the courts of our God. They shall still bring forth fruit in old age…” Psalms 92:13-14

Eagles (the prophetic) are called to soar in the spirit where they have prophetic vision. Their claws are designed to take prey and perch on limbs, not pews. Their heart cry is for freedom in the body of Christ. The heart of a pastor is given a “protective role” as a shepherd to oversee the sheep. When the prophetic displays the nature of God, pastors can rest due to mutual trust. Thus, many pastors’ will isolate the prophetic because of the issues prophetic ministry often creates.

One answer for this is for a Church to establish an apostolic/prophetic training center where people can grow and mature in the divine nature of Christ as well as their gifts. It is especially needful to prepare for the coming outpouring. With every outpouring, there is an increase of prophecy, visions, and dreams. Without proper preparation, the coming fire may well burn the house down.

Unfortunately, there will be leaders that leverage their position for the purpose of control under the guise of “protecting the sheep “ in order to maintain their influence and recognition. The root of this is fear and insecurity.

As a ministry TO THE CHURCH, we believe ministry comes out of a relationship, not gifting. I love to connect and build relationships with Church leadership.

Those who see me after the Spirit that knows my heart, easily form a divine connection – an alignment made in heaven. There will always be those that reject you and oppose you. It is a test that every prophetic minister must face and overcome. Those who do so will have God’s divine nature and favor, that reveals the Father’s heart and His love to those they minister to. God promotes the humble and His love never fails. God looks at the heart, which we must guard and protect.

Peace, love, and joy are a fruit of the Kingdom of heaven. Fear, insults, territorial preservation, the religious, political and controlling spirit, gossip, slander and hearsay, jealousy and envy have no place in the Kingdom of God. We must walk in love displaying the fruits of the Spirit if we are to prevail in the days ahead.

The Call To Build

God is mobilizing a people with the heart of the Father that will work together as one. Those burning with the heartbeat of heaven are finding each other. An Apostolic / Prophetic alignment is now forming in the region; you will know them by their love. God’s heart is to restore the wounded and the fallen, the forgotten and those that are isolated. For this reason, many are called with the Is. 58:12 anointing,

“To build up the waste places” to raise up the foundations of many generations and they shall be called, “The repairers of the breach. The restorers of paths to dwell in.”

Christ is not divided. There is only one body – His. If we are truly prophetic, we will heed the call to join hearts to build up the body of Christ. The purpose of every prophetic minister is to reveal the divine nature, mercy, goodness, and heart of God to His people. With the Nehemiah anointing, it’s time to rise up and build “As one” to restore the burnt gates and repair the fallen walls.

We cannot truly say we are for unity and restoration if we choose to remain divided. It is time for those who operate in the prophetic, and those that have true spiritual authority, to come together and join hands. Let us be a part of the solution, not the problem. God’s heart is for restoration and redemption. The call of every believer is to “Endeavor to keep the unity of the Spirit in the bond of peace. (Eph. 4:3)

In doing so, the power of prophetic unity will launch the “arrows of deliverance” that will heal the brokenhearted, open prison doors and set the captives free. God’s house will be filled with the dew of heaven, a house fitly framed together for a habitation for the Spirit (Eph. 2:19-22).

But above all, the unity of God’s people will usher in the glory of Christ that manifest His Kingdom “On earth as in heaven” in the midst of His people where everlasting peace, love, and joy rules the day.

In His heart and love – Roy Roden