The Woman of War – A poem by Roy Roden 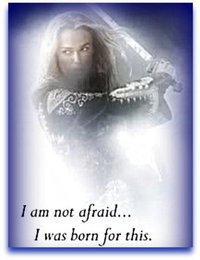 Clothed in brilliant armor without even a whisper

As she rides with Christ her Lord and Savior

In worship she falls prostrate as a willing captive

To the eternal love of her heavenly Father

The place of freedom as a confident warrior

Like Queen Ester, she holds the eye of the King

As Jon of Arc the armies of heaven she does lead

Through intercession she moves the heart of the Father

Who leads her to victory as her chief commander

Standing before Christ in heavenly places

Hidden in the vault of her pure heart

Lies the issue of life, her divine treasure

But tender in heart for the Glory of Zion

Wielding the sword with deadly hands

She takes dominion of her promise Land

Granted by God with the timeless honor

To crush the serpents head – the great deceiver

In the power of the gospel with signs and wonders.

Prophetic Tidbit:Now is the time for the lioness to rise up to be all they are created to be. It will be to the women that God will ascribe with great honor, because of the enmity they have with the serpent (Genesis 3:15), to crush its head. For by Christ power that dwells within, from the place of His victory at Calvary, they shall be used mightily to destroy the works of the devil (1 John 3;8).